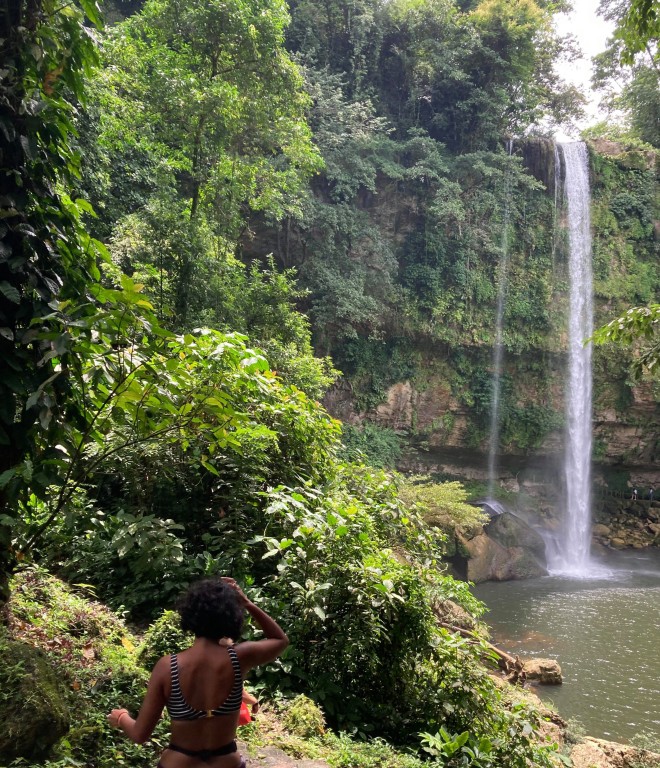 The hostel I stayed at in San Cristobal was 30% English boys being wankers (‘My Oxbridge application was going really well, but I got pissed the night before my maths exam. Classic me – it just happens! Wanna do shots on the canyon tour????’) However, UK lads on a publicised bender aside, it was a cool place. It lacked the cultural tenacity of Oaxaca, and felt a lot more curated for tourist appeal – vegan boutiques and raves galore – but once I completed the free walking tour, I realised that below its shiny surface thrived a hub of indigenous activity, intricate traditions and phenomenal scenery. Under the guidance of our enthusiastic and potentially tipsy guide, we walked for 3.5 hours whilst nursing severe hangovers and marvelled at the local street art and the vast, sprawling market in which local women sold handmade clothing. The guide explained the significance of this attire: the embroidery was skilfully hand-stitched, and the symbolism often related to indigenous ideology.

We passed stalls selling amber and obsidian. As it so prevails, obsidian has many very practical uses.

‘If you are having problems with sex or fertility, you take this egg,’ explained the guide, plucking a sphere of the black stone from a nearby market stall.

We looked at him.

‘Trust me!’ he said. ‘My wife and I had a miscarriage. She used the egg. We had a Netflix and chill. And now my daughter will turn 3 next week.’

We adventured in the Sumidero canyon; the boat docked below a waterfall where we were flecked by its cooling embers. The journey meandered through the murky river, and we passed the occasional fat crocodile lounging in the heat. Around their colossal, prehistoric forms flounced incandescent butterflies.

On my last day at San Cristobal de las Casas, myself and a couple of friends journeyed to a famed church named ‘Iglesia de San Juan’ in a nearby town. We were not permitted to take photographs once inside: I can only presume that were I to have visually documented the experience my camera would have cracked and I would have been cursed.

Upon entry, we were greeted by a large chamber with a reddish hue and hundreds of candles. Garish wax figures of saints – all of whom were brandishing mirrors, for some reason – stood guard on the side. At the alter chimed an eerie melody that we realised was ‘Silent Night’ and ‘Jingle Bells’ played on the organ simultaneously. The ground was covered in grass cuttings. Scattered on their knees were families from the surrounding villages, lighting lines of candles. Children laughed and frolicked in the grass.

A crouching older man brandished a sack, which he waved over the lines of candles that he had set up upon the ground. Suddenly, the bag began to squawk. He removed a live chicken, waved it over the candles some more, and then pulled its neck. Pulled its neck. Until it died. Note that I did not say wrung its neck – that might have been a quicker, less painful death. The Christmas carols were momentarily overwhelmed by the screeches of brutal sacrifice.

Apparently, the bird absorbs the bad energy and illness from the family, and then must (of course) be culled so that said negative forces perish with it. This is a lot of social responsibility for a chicken.

We travelled to Palenque via a perilous tour bus that took us overnight through terrain ruled by the apparently murderous cartel, and dropped us off at two waterfalls en route to the infamous Palenque ruins.

Before we were taken to our hostel, we visited Zona Arqueológica Palenque, the home of some Mayan ruins. Our guide explained that few of the ruins were polished up for visitors – the vast majority of them are largely buried underground, and those in charge of the site were faced with the choice of partially recovering a lot of ruins, or fully excavating and tending to a chosen few. We were taught that the wealthy dead were intentionally placed in tombs varnished with red paint that became toxic when it degraded. As such, when the tombs were discovered and opened centuries later, the unfortunate explorers exposed to the fumes were given long-term, fatal respiratory infections.

We were also taught about the Mayan star sign system (apparently I am ‘The Influencer’ – I need to step up my Insta selfies game), and how many of the discovered buildings were built in exact conjunction with the sun’s cycle, so that it shone into particular crevices at chosen moments. We heard the distant bellows of howler monkeys and drank fresh spring water from the stream that snaked through the park.

The town of Palenque is less exciting than the nature that surrounds it, so I did only minimal wandering there. In the evening, the hotel opposite hosted live salsa music. We had some drinks ($5 for a tequila shot… we were conned) and joined in a little with the locals’ dancing.

The following day, we had time to burn so we voyaged to another waterfall. We were hoping for its trademark gentle blue pools, but due to the raining season the water was murky, and the banks swollen and gushing. The current was so strong that I avoided swimming, marvelling instead at the abundance of angry water.

The more adventurous among us dared to venture in for a swim. The swirling currents looked violent, and I recalled a saga El Rio Hostel in Colombia a couple of years ago; I had been tubing down the seemingly docile river and was dragged from my float, past the hostel. I remembered the startling fear of losing my footing and control.

‘I’ll stay here with our things,’ I conceded.

At first, the swimmers revelled in the glory of their daring. They swam to the centre of the river, on a small island upon which they could stand. When they came to return, the current’s ferocity outweighed their writhing bodies, which now looked fragile from the shore. Eventually, all parties made it back. My friend Bonnie was spluttering, and the boys were shaken and a little dazed (although they pretended not to be, naturally).

‘That was a near-death experience,’ said Bonnie. ‘FOMO gets you nowhere.’

Notably, I am far littler than any of those who entered the water and it would not have been possible for me to have outmanoeuvred the current like they did, after their struggle. Trust your gut.